Mrs. Helen Matilda Kolb, 73, a resident of Snohomish since 1913, died March 4 at her home on Route One. Mrs. Kolb was born March 31, 1877, at Brownhelm, O., and went with her parents to Wisconsin when she was 3 years old. In 1901 she moved to Everett and twelve years later came to Snohomish. Mrs. Kolb was a member of First Methodist Church of Snohomish. Surviving are are [sic] her husband, Godfrey Kolb at the family home; three daughters, Mrs. F. B. Dreyer of Sunnyside, Mrs. Albert Fisher of Sutherland, Ore., and Mrs. Carl Nelson of Zillah; one son, Ray Kolb of Seattle, one brother and one sister in Wisconsin and eleven grandchildren. Funeral arrangements will be announced by Purdy and Dawson Funeral Home. 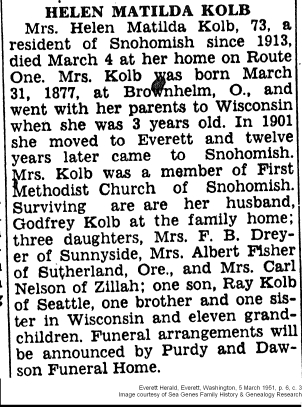