Family Trees begins by detailing the basis for keeping many of the records that our ancestors kept. He goes on from there to detail the large pictures over the next several hundred years of genealogical research. Weil goes into some detail to discuss how the people and the methods they use are changing over time.

The book is well organized. He weaves each major section of the book together expertly and places each major player in their respective time lines: the record keepers, fraudsters, and reformers all have their places.

The discussion toward the end of the last chapter is especially pertinent today as it deals with the democratization and commercialization of genealogy and family history research. Weil details the industry and its effect on genealogists.

Funeral services for Albert W. Worthen of Los Angeles, former Portland resident, who died on his way to visit relatives here, will be held Saturday at 2:30 P.M. in the Holman & Lutz Colonial mortuary. Rev. Paul G. Dickey of Parkrose Community church will officiate. Commitment will be private at the Portland crematorium.

Worthen’s death occurred in a tourist camp in Arcata, Cal. He had been head of the personnel department of Douglas Aircraft company the past three years in Los Angeles. Between 1912 and 1917 he was assistant claim agent for the Portland Electric Power company in Portland.

James Walter Williams, 53, of 9234 S. W. 31st avenue, died early Friday at a Portland hospital after a few days’ illness. He had been an employe of Western Union since 1916, the year he came to Oregon, where his work was that of a Morse operator. For several years he had been stationed as operator for Western Union in the newsroom of The Oregonian.

He was born September 5, 1891, in Delavan, Wis. Surviving him are the widow, Mrs. Minnie Williams; a son, PFC Gerald L. Williams, 22, with the 313th engineers, 88th division of the army in Italy, and a daughter, Beverly Ann, 6. The son at present is home on furlough.

Funeral arrangements are in charge of J. P. Finley & Son, the time still to be set. 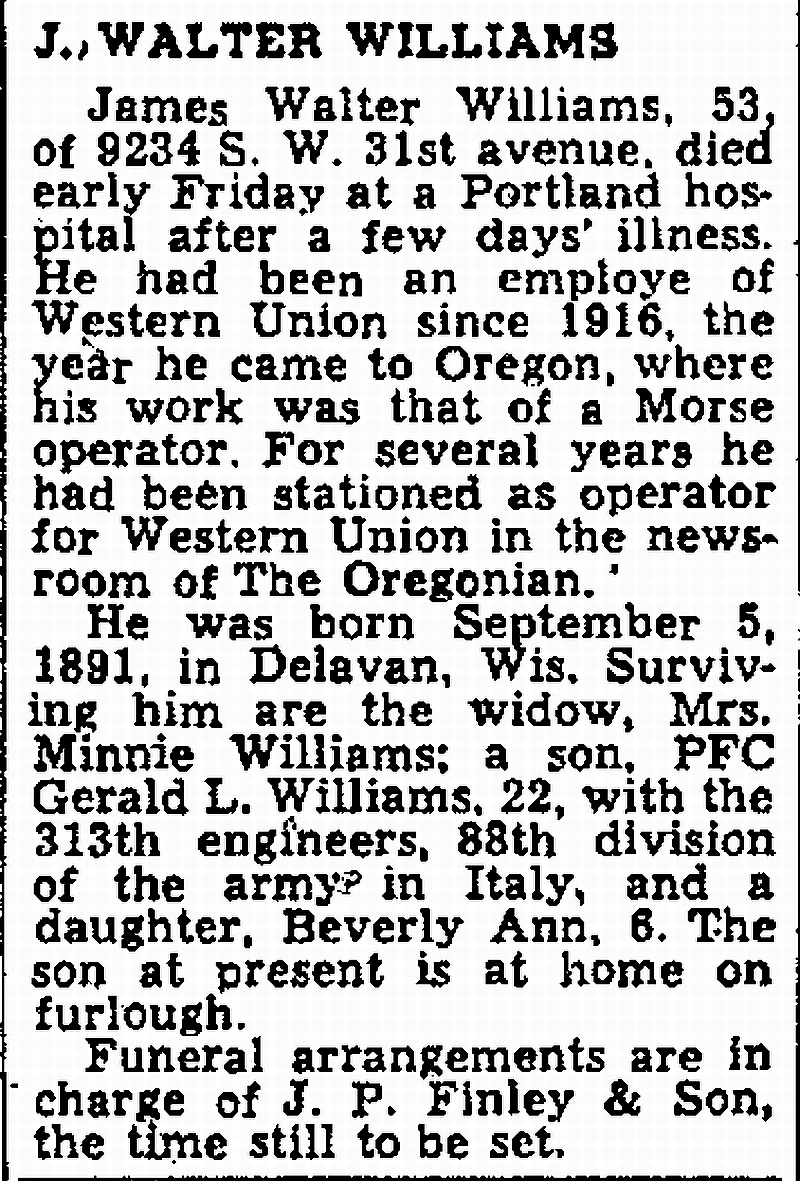