The Original Version and Changes Thereto

The format of the published research is the author’s own creation and interesting in that it combines in discrete family group sketches several generations of the Haven family. The original author, Josiah Adams, created a format for presentation of his forebears and relations that is extremely dense and difficult to work with.

The pages are full and the text cramped. The author used many abbreviations for places (i.e., “Fram.” for Framingham) and terms frequent in the text (i.e., “com.” for committee). The result of the abbreviations and the typographical style is a nightmare of typography.

Due to these factors, I decided to re-work what Mr. Adams had done to make it more accessible to current and future researchers.

The type is changed and the formatting slightly modified to meet current publishing standards. The original page size was smaller than it is here and the type more closely set, resulting in difficult reading.

Most of the abbreviations Mr. Adams used in the original have been fully spelled out to prevent possible confusion. This change also makes the text flow more realistically.

When I started working with this particular book as a resource in a genealogical research project, I wondered if it would be easier to use if there were an index. I also wondered what it would look like if it were re-set in a somewhat different format. An index however, would be as unworkable and as dense as the original, so I decided to leave the volume as an online, on-screen document. This way a researcher can simply work with the book alongside their favorite genealogy program, making their own changes there, and compare their work to what has already been published.

The first thing I did was find a clean copy to work from. One copy I found had considerable marginalia and blobby type. Another copy had no marginalia and clean type; perhaps it was an earlier impression in the printing run. The text file from the clean-type copy gave a much better working draft to begin cleaning up and indexing. The mechanical editing and proofreading was carefully done as there were stray characters inserted by the optical character recognition (OCR) software. Words and characters also had to be reinserted because the OCR software had either misread the text or removed them entirely.

Further editing was then possible. This was necessary to flesh out abbreviated terms and correct typographical and other errors. The resulting text is more readable, and a bit more visually pleasant to use. I also made a number of editorial and typographical changes to modernize the text.

One idea I had, was to restructure the text into a New England Historic and Genealogical Register-style format. This would have resulted in a completely different text, so I have left the structure as found in the 1843 edition. Readers familiar with that edition can compare it to the new one. Because the new edition has a different typeface and a more open presentation, the original pagination was lost. The original page numbers are inserted where they occur as editorial additions in the margin, as such “OP 42”. This addition also preserves the connections between the jump links in the original (i.e., the use of jump links between sketches, like “(See p. 48.)” and “(From p. 17.)”) placing the “From p. 9”, for instance in the margin, as well.

Almost all the italicized words, especially those inside quote marks, have been made regular type. The reason being is that the unnecessary italicization makes the proper names in italic type harder to find.

Toward the end of the original are several items that I thought would be unnecessary in the new edition. At the bottom of page 49 of the original is a note from Mr. Adams; it has been removed. Following page 49 in the original are two tables listing graduates from New England colleges and universities. These have been removed as their content has been shifted to the index. Pages 53 and 54, the transcript of Richard Haven’s will, remain and are set pretty much as found. The will transcript is referred to in a number of the earlier family sketches, while the graduate tables are not referenced at all.

The typeface used in the original is unknown to me, so I used Linux Libertine. Linux Libertine is a modern interpretation of an early typeface and is designed for use in general-purpose publishing. While the Haven genealogy uses only a few of the characters in the Linux Libertine set, the visual effect is reminiscent of the time that Josiah Adams lived in, and is therefore appropriate to the subject matter of the book. A number of weights and fonts in the family appear, making the entire volume pleasant to look at on-screen and in a printed version. While there appear to be many fonts used, the important thing to remember is that they are all complementary and they fit together as a family in themselves.

A view of part of the original 1843 Haven Genealogy 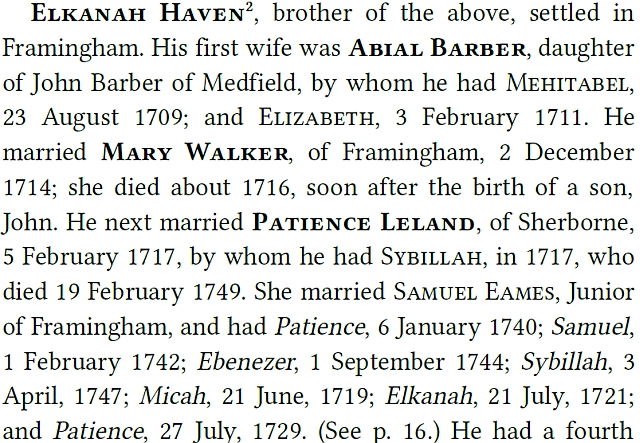 Part of the overhauled Haven Genealogy